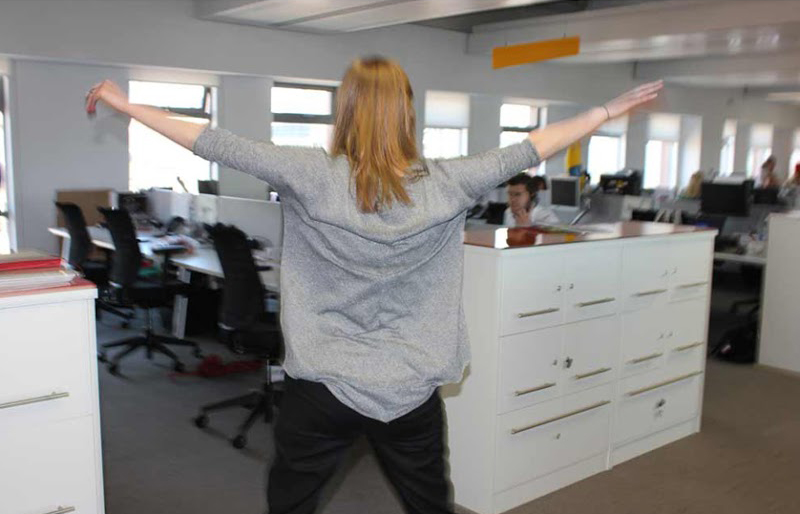 During a long-term placement within Glasgow Life - the charitable trust that delivers cultural, sporting and learning activities on behalf of Glasgow City Council. I examined and explored the various ways in which the infrastructure of the organisation (including its architecture) affected both its workers and its output. It involved many micro-interventions, and included here are two:

(1.) Cultural Policy: As Glasgow Life’s mission is to: “inspire the city’s citizens and visitors to lead richer and more active lives through culture and sport” I asked staff to do a push-up or jumping-jack in exchange for 0.10p, thereby making them ‘richer’ and ‘more active’. In this way, I more effectively and successfully delivered their mission and called into question the organisations very function, asking it to reflect on what it does, and how.

(2.) The new open-plan office that had been constructed especially for Glasgow Life seem sterile and ‘soulless’ which was odd for an organisation that sought to deliver culture, which is relational, messy, exciting and complex. It was excessively ‘corporate’ and invited no individuality nor self-expression, and rejected ‘the body’ in every element. As such, I wished to critique the controlled spaces of corporate bureaucracy which constrain physical expression (and therefore place limits on the kind of identity one is able to have, and thus cements an intellectual hegemonic control), I developed The Fight Club as intervention which might offer alternative perspectives of how the institution might function, of different types of relationships and of new possibilities of action/activity/identity.

I had worked on 5 or 6 projects that had been funded/supported/guided by Glasgow Life and found their intentions and approaches to be both restrictive and oddly formulated, with a very strong current of ‘social inclusion’ which appeared more like ‘social engineering’ rather than a diverse cultural offer. I therefore approached the directors of Glasgow Life to ask if I could explore their ‘institutional intent’ and cultural policy in a short ‘residency’ style project. It was modeled quite clearly with the Open Brief and Incidental Person in mind, and APG’s previous work was shown to directors as my conceptual lineage: I would have free reign to explore all elements of the organisation, and at any level. I am not sure why they agreed, but possibly because they were also in a process of organisational change, and felt such a residency might be useful for them to think through how they functioned and why.

Add items such as...

The project had several intentions: 1) For me to examine the ways in which the infrastructure of the organisation (including its architecture) affected both its workers and its output, 2) For the organisation to reflect upon how their work was constructed affected their output, trying to make a feedback loop between the ‘cultural offer’ and the ‘cultural management’. It was methodologically based on participation strategies which aimed to make the work relational: instead of the ‘culture’ being delivered externally, what might occur if this organisation was ‘the community’ to be engaged with?

The understanding that most people also rejected the corporate structures, including the directors, but the infrastructure and organisational culture seemed to be perpetuated by the very architecture (the building) but also the overwhelming (assumed) logic of what ‘The Council’ should be. Thus, the project created a change in me to be complicated about ‘institutions’ - they are made of people, and people can change. For the organisation, it invited much reflection about the nature of policy and how policy could function. Mark O’Neill - Head of Policy and Research - wrote to me once the project was complete saying: “I was in the process of redrafting out policies during your time with us. Your residency reinforced my awareness of the opaque language and unarticulated assumptions that most cultural policies make.This definitely made me even more determined to make the tacit explicit and as far as humanly possible to use everyday language...I can now guarantee that you will be able to demonstrate direct impact on the cultural policy of a major UK city.”